Sleep apnea, along with the risks it involves, can be hard to treat completely and make it go away. However, there are methods to treat and manage the disorder, and oftentimes the side effects and risks that come with sleep apnea will disappear with proper treatment and with the management of problems that would naturally increase the risk of the various complications the disorder involves, such as possible stroke or the development of diabetes.

Treatment methods for sleep apnea can vary greatly, from the use of a CPAP machine to surgery. Below we will take a look at some of the most efficient methods that sleep specialist professionals and patients alike have agreed might offer ideal results in the case of most people suffering from sleep apnea.

The Use and Benefits of A CPAP Machine

A CPAP (continuous positive air pressure) machine can be ideal in managing some forms of sleep apnea. While studies often present conflicting evidence as to the machine’s effectiveness in reducing the risk of cardiovascular events, CPAP machines are known to alleviate the symptoms and problems caused by sleep apnea to a great extent. 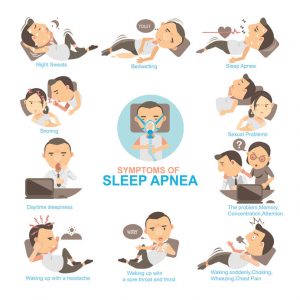 These machines involve the use of continuous air pressure to keep the airways open and help with the breathing process. People suffering from sleep apnea often say that the use of this device has helped them considerably, and that they were actually able to get a good night’s sleep with its help.

Depending on the type of sleep apnea you have, the use of a CPAP machine might be more or less effective. However, some patients have also complained that using more affordable CPAP machines has led them to experience feelings of being trapped and constricted, as well as sore lips and gums, or various forms of skin irritation, after using them.

Lifestyle changes involving taking up healthy habits such as regular exercise and dieting, as well as yoga and various other forms of oriental practices involving a combination of harmonious physical movement and breathing techniques has also been known to help with sleep apnea in some cases. Although the holistic approach might not always be able to target sleep apnea directly, losing weight as a result of healthy practices has been found to reduce airway obstruction, prevent the onset of sleep apnea episodes during the night, and greatly diminish the risk of having a stroke or a heart attack during sleep.

Finally, it’s also possible to use various forms of surgery and methods such as neurostimulation of the diaphragm and nasal EPAP to help manage the problems caused by sleep apnea both in the short and long term.

Sleep surgery is typically used in the case of people who can’t be helped using any of the previously mentioned techniques and methods. In order for the surgery to be a success, it is very important that the proper diagnosis be made regarding all the anatomical areas of obstruction, and that the surgical procedure be specifically adapted to each individual patient in part.